From 1315, the village was a trading port and steamers and ferries visited from Hull to attend the market and fairs. A Royal Order for the detention of spies was issued in 1342, which states Burton upon Stather as a port in the County of Lincoln. At this time it was busier than Gainsborough and may have been the busiest on the River Trent. Unfortunately in 1770, there was a large storm causing much of the town to be destroyed along with the river banks. This caused flooding to the rest of the parish. Another disaster occurred on 20th February 1777, when the brig 'Phoenix' caught fire and twenty barrels of gunpowder exploded, causing many houses to lose their roofs and damage to the church. Again in 1836, the banks of the River Trent gave way.

During the 19th and 20th centuries, Burton upon Stather was a large manufacturer of bricks and tiles and ironstone was mined in the neighbouring hamlet of Thealby. By the mid 1920's the Dugout Bus Company had been formed in the village, whose buses had a dark green livery with gold lettering.

The term Stather is of Danish origin and implies a landing-stage. Up until 1914, the river landing was used as a calling place by steamers between Gainsborough and Hull.

A large slipway of concrete and wood to the north of Burton upon Stather was built in 1944 by the 79th Armoured Division (United Kingdom) used for testing and training with amphibious Duplex Drive tanks during the Second World War.

In 2009 a voluntary group was set up to protect and restore the old Tank Ramp on the River Trent.

The Parish Council owns and rents various pieces of land throughout the parish. These include the playing fields, which is a section of land on the outskirts of the village, with facilities including a children's play area, multi-use games area, outdoor gym and a pavilion. It is also used for training and matches by a local youth football team. 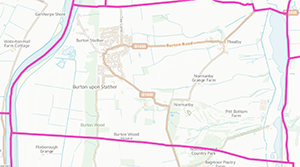